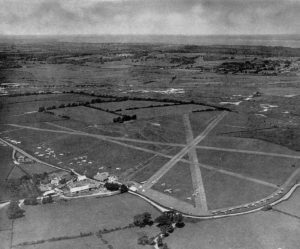 Bembridge Airport opened in 1920 on  land owned by Bembridge Farm. In 1921 the airfield became a licensed aerodrome and in 1933 was listed “Approved” by the Automobile Association, with a grass runway of 600 yards.
In 1934 airline services were commenced by Spartan Airlines and terminal facilities were built. In the following 5 years other airlines (Portsmouth Southsea and Isle of Wight  Aviation and Channel Air Ferries ) operated into Bembridge. However, when  WW2 started, Bembridge was closed and the landing area was obstructed by  ditches to prevent the use of the airfield in the event of invasion.

Post war, the airfield reopened in  1946 but airline services did not resume. However, general aviation activities continued. In the 60’s Britten Norman started manufacturing the Islander aircraft (and later, Trislander) at their factory on the north side of the field. Eventually a concrete runway (the only one on the Island) was laid. In spite of a somewhat chequered financial history and a  succession of ownership changes, Islanders are still in production  today, with over 1200 built.

A Britten-Norman subsidiary company Aero Composites Ltd (ACL), started  assembly of the Cirrus SR20 and SR22 aircraft in 2005 and delivered the 50th aircraft in November 2006. General aviation also continues to be a major part of Bembridge’s business, particularly during the summer. At the end of 2010 control of the airfield , which had been in the hands of Britten-Norman, reverted to Bembridge Airport Ltd.

The Vectis Gliding Club flew an aerotow only operation from 1996 until 2016, and although no more gliders are flown from Bembridge, the Club now continues to manage the airport on behalf of Bembridge Airport Limited.
EGHJ – UPDATE
EGHJ is now open subject to government advice & guidelines.
Please be aware of the
New Customs Reporting Requirements for General Aviation in GB

THE AIRFIELD IS OPEN

THE PROPELLER  IS CLOSED UNTIL FEBRUARY

This website uses cookies to improve your experience while you navigate through the website. Out of these, the cookies that are categorized as necessary are stored on your browser as they are essential for the working of basic functionalities of the website. We also use third-party cookies that help us analyze and understand how you use this website. These cookies will be stored in your browser only with your consent. You also have the option to opt-out of these cookies. But opting out of some of these cookies may affect your browsing experience.
Necessary Always Enabled
Necessary cookies are absolutely essential for the website to function properly. This category only includes cookies that ensures basic functionalities and security features of the website. These cookies do not store any personal information.
Non-necessary
Any cookies that may not be particularly necessary for the website to function and is used specifically to collect user personal data via analytics, ads, other embedded contents are termed as non-necessary cookies. It is mandatory to procure user consent prior to running these cookies on your website.
SAVE & ACCEPT